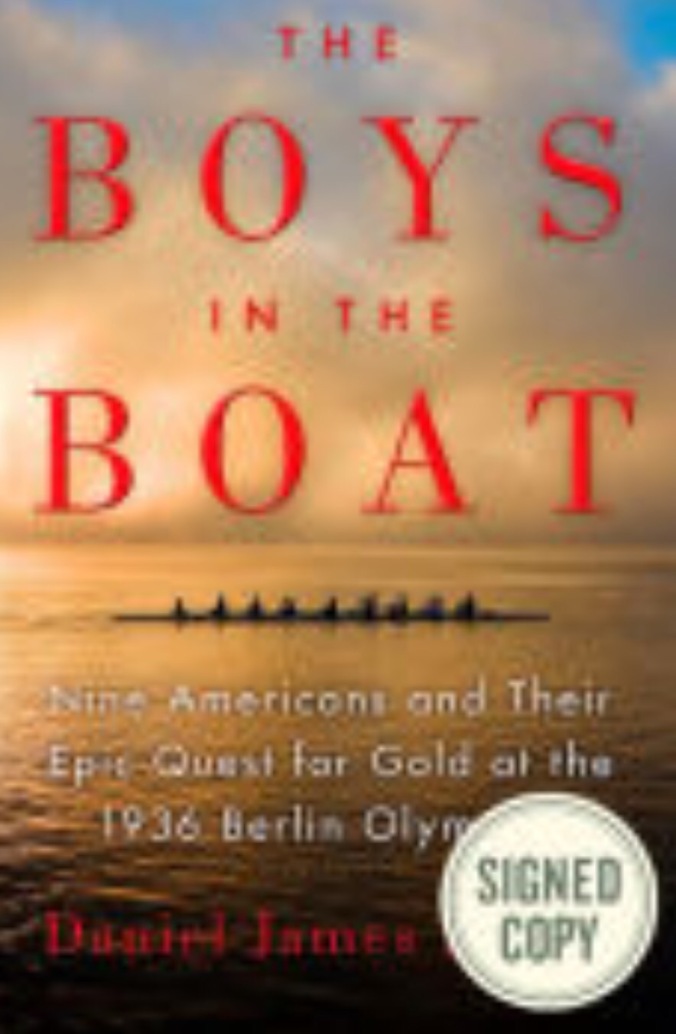 At Barnes & Noble right now if you’re lucky you may still be able to get a signed edition of The Boys in the Boat: Nine Americans and Their Epic Quest at the 1936 Berlin Olympics by Daniel James Brown. Signed editions like Boys in the Boat and from additional acclaimed authors like Tony Bennett, Ina Garten and Sherman Alexi are available in limited quantities while supplies last.

Plus not to be outdone at Amazon:

**CANCELLATION** Alton Autumn Head planned for today has been cancelled.

Tyne Amateur Rowing Club,  located north of England on the River Tyne at Newburn just west of Newcastle upon Tyne will host Rutherford Head of the River today. Named for Rutherford College, founder of the regatta, the 4500m+ course runs upstream starting at Scotswood finishing at Newburn.

The 63rd Annual ﻿Scullers Head will be hosted by Vesta Rowing Club today in the Thames Region.

So it’s the day after Thanksgiving and all the gobbling is done. What now? The Rower in you has so many choices. The erg is a sound one after that 5000 calorie Thanksiving plate if you ate like a national champion yesterday.

REI is closed today and invites you to #OptOutside and forgo shopping.

Then there are the sales, from Apple to Zabar’s there is something for everyone. If the rower on your list needs something other than a new Mac or knish these sites and stores may be helpful:

Sweaty Betty, 25% off everything. One of my favorites, great for spandex and stuff, always has bathing caps that work in stock.

LLBean, a favorite for generations in my family, my grandfather even bought a tent here many, many moons ago, has 20% with a $50 purchase. And as always free shipping.
Eastern Mountain Sports, a.k.a. EMS has up to 50% off plus one full price item at 20% off and/or one clearance price item at 20% off using code FRIDAY. Free shipping too.
Dick’s Sporting Goods has a lot on sale online and in stores and is offering an additional Black Friday Bonus for $20 off a futures purchase of $100 or more.

Patagonia always has something I want, but seldom need because even though my stuff is so old it wears like iron. Even the passed down stuff. But today there’s a greater reason to shop Patagonia, they are donating 100% for the planet. That’s the best deal yet. 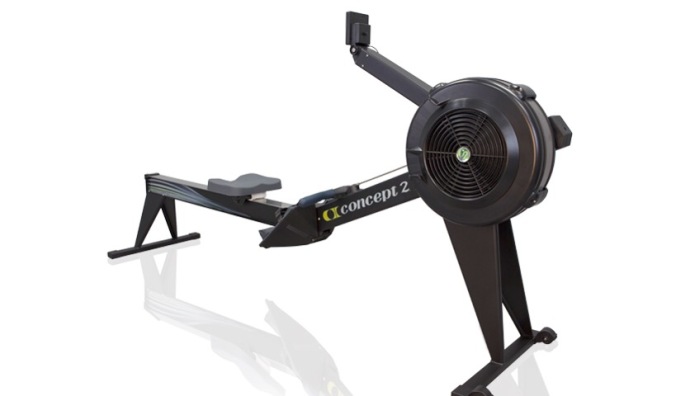 And finally, Concept2 does not have a sale. Sometimes there are specials at regattas and after events like the CrashBs. But check out the new Black Model E. It’s stealth in a way that you just have to keep up with it. And while you’re at it check out the new Bantam sculls with an innovative compact blade.

Not so fast in Philadelphia! First things first in the Land of Liberty. Rowers run in Philly! And there’s running before turkey, trimmings and pie with a hilly course just shy of 6 miles on Boathouse Row hosted by Schuylkill Navy. The oldest cross country competitive run in the country, Schuylkill Navy Run, a.k.a. Boathouse Turkey Trot will be held today in Philadelphia for 240 Master, Open, High School, Junior, Novice and International entries from 31 clubs.

“Man has always needed to believe in some form of a continuity of achievement.” 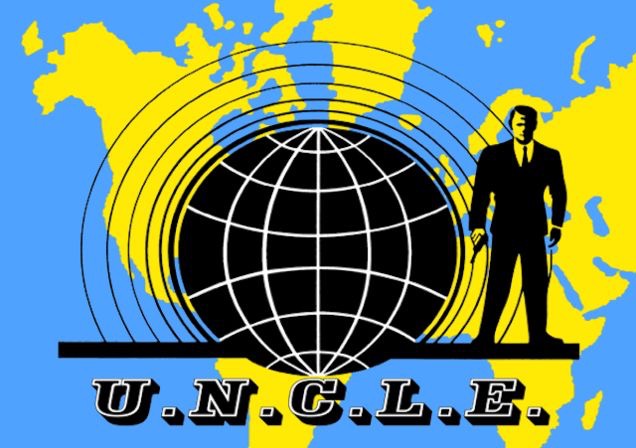 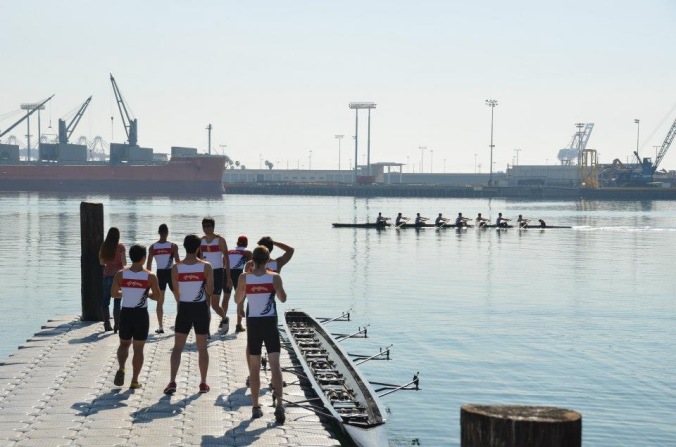 In California, Head of the Harbor will be held today at Berth 194 in the port of Los Angeles a.k.a. America’s port for Collegiate entries hosted by USC Men’s Crew.

In British Rowing, York Small Boats Head, established in 1982 will be held Sunday 20th November 2016 in the Yorkshire region. York City Rowing Club will host the 3000m upstream course on the River Ouse at York starting from Fulford Landing to finish at Kings Straithe. Engraved goblets will be presented to heat winners.

Star Club Head of the River incorporating the Great Ouse Championship will be held Sunday 20th November 2016. Star Club will present the Poynter Trophy and Pint Tankard to the best single male and female scullers, a.k.a. Champions of The Great Ouse. Star Club tankards and Star Club medals will also be awarded for best heats. 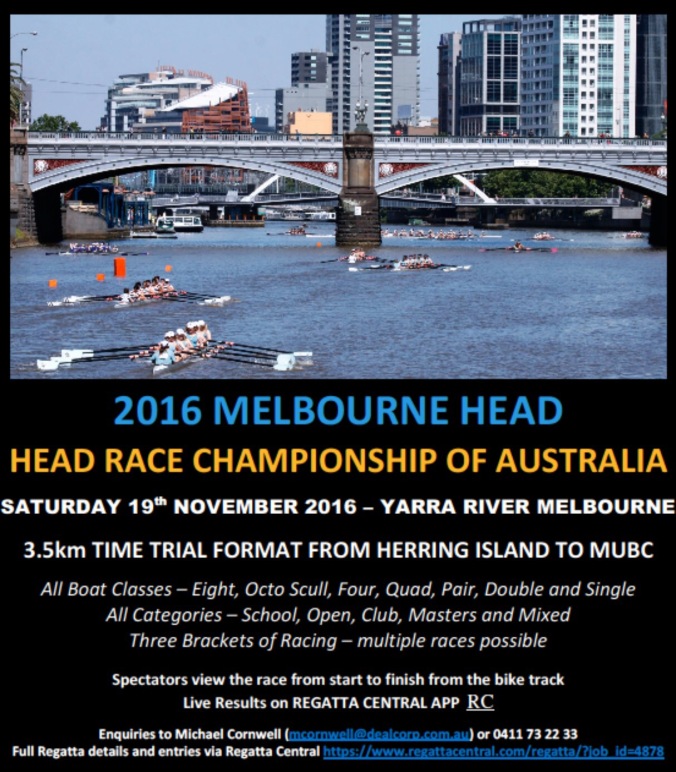 2016 Melbourne Head Race Championship of Australia will be held today on the Yarra River in the city of Melbourne, Victoria. Upper Yarra Rowing Club will host 497 entries from 60 clubs to the 3.5km course starting from Herring Island finishing at Melbourne University Boat Club.

Gobble, Gobble, Gobble…  Head of the Giblet 2016 will be held in Orlando, Florida at Bill Frederick Park. South Orlando Rowing Association will host 283 entries from 28 clubs on Turkey Lake.

Duathlon at the Bend 2016 will be held for 120 Master, High School, Junior and Novice entries from 8 clubs. Sarasota Crew will host at Nathan Benderson Park.

Leader of the Lake 5K will be held today at Clermont Boathouse on Lake Minneola in Clermont, Florida. Lake County Rowing Association will host 27 entries from 7 clubs.

Loughborough Boat Club established in 1881 on the River Soar in Hathern at Loughborough, Leicestershire will host Soar Head of the River in the East Midlands region.

Avon County Rowing Club founded in 1973 will host Avon Autumn Head of the River in the WAGS region. 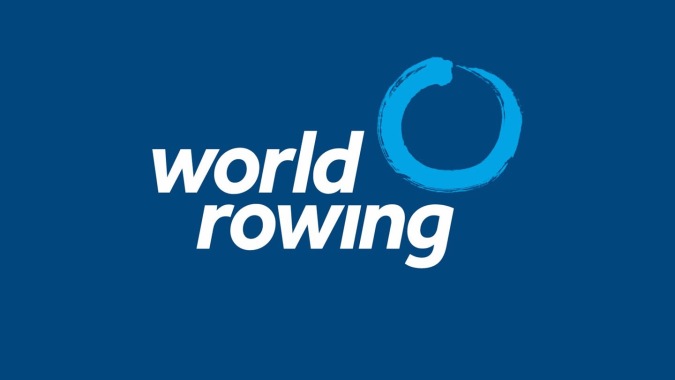 In World Rowing, the 2016 Basel Head will be held on the River Rhine in Switzerland. Trinationaler Regattaverein Basel will host the 6.4k course with an exciting mid-race 180 degree turn finishing in an exhilarating 500m sprint for Senior, Junior and Master entries.

“Everything you can imagine is real.”

Bill Braxton Memorial Regatta will be held today in West Windsor Township, New Jersey. Philadelphia Girls Rowing Club will host 394 entries from 54 clubs to the regatta now in its 43rd year. Bill Braxton rowed undefeated with Marietta Lightweight 8+ until just after the Dad Vail Regatta Regatta in 1973 when he was lost to a car accident in his Sophomore year at Marietta. The regatta funds educational scholarships for two graduating high school rowers each year. For Bill Braxton Memorial Regatta Scholarship information check HERE. 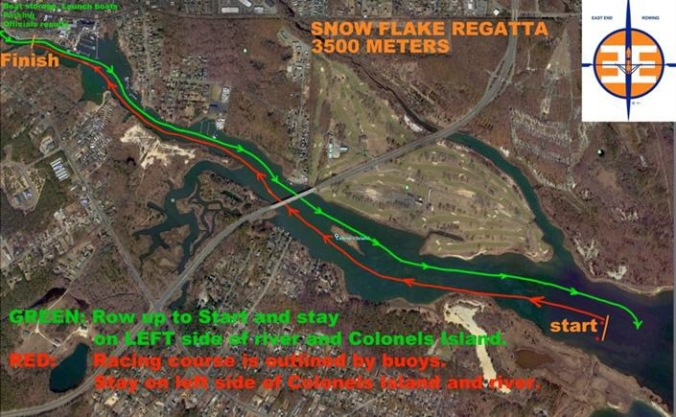 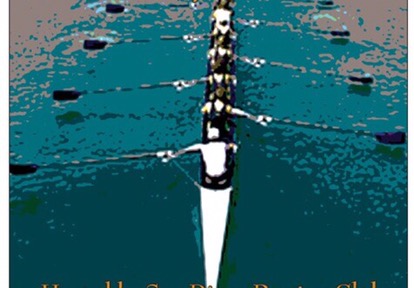 Also in California, Head of the Lagoon – Juniors will be held in Foster City. Peninsula Aquatic Center junior Crew will host 318 entries from 21 clubs on Foster City Lagoon. 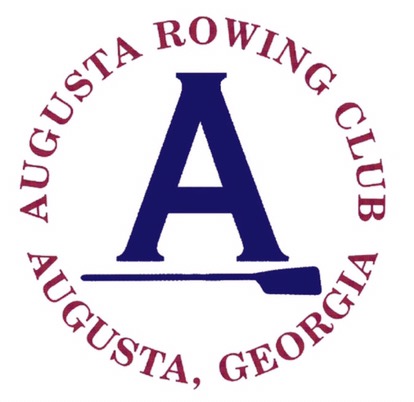 **CANCELLATION** Augusta Rowing Club cancelled Augusta Rowing Marathon planned for today in Georgia due to insufficient volunteer sign up. There will be a group row meeting at the ARC boathouse.

In British Rowing, Veteran Fours Head of the River will be held Sunday 13th November 2016 in the Thames region. Veterans Four Head Race Committee will host and awards medals in heats with more than two entries. Two minutes of silence will be observed for Remembrance Sunday before racing commences on the the flood tide from Mile Post in Putney to Barkers Rails in Chiswick.

Northwich Autumn Head will be held Sunday 13th November 2016 in the North West region hosted by Northwich Rowing Club on the River Weaver in Cheshire.

Head of the South, one of the top 10 regattas in the country will be held in Augusta, Georgia for 699 Master, Open, Collegiate, High School, Junior and Novice entries from 72 clubs. Augusta Rowing Club will host the 20th annual regatta on the scenic Savannah River. The race starts in North Augusta at Hammonds Ferry continuing by the River Walk Amphitheater for a finish at Augusta Boathouse.

In British Rowing, Head Of The River Fours will be held Saturday 12th November 2016 in the Thames region hosted by Head of the River Fours Race Committee. 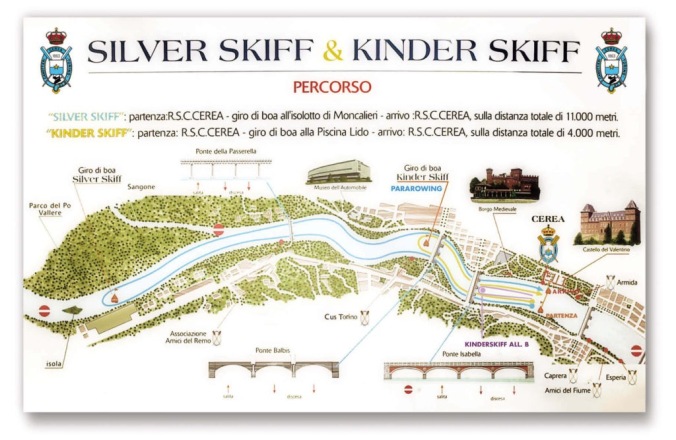 In World Rowing, Silver Skiff Regatta 2016 will be held over the weekend in Torino, Italy. Reale Sociaeta Canottieri Cerea will host the 6000m endurance course for over 500 Senior, Lightweight, Under 23, Junior and Master entries.